One more card for Craft for Clearwater Marine Aquarium

It's time to show you my final projects with the last two digis I received when I donated my contribution to the Clearwater Marine Aquarium through the Kit and Clowder FB-site. They will come in two separate posts. The first one you will find below.

Before I show them, I just want to point out, that there is still time to donate here: www.youcaring.com/clearwater and when the competition expires tomorrow, donations will still be possible through the Clearwater website but without the digis.  Don't forget to follow the instructions on the website if you want them, so hurry up and donate.

The second project I made, was made with the Tiddly Ink image "Tale of a tail" also known as"Clearwater Wryn". I held it in blue and yellow colours signifying that we've donates so much, that there would be a golden future for the two dolphins Winter and Hope (and the other animals there). 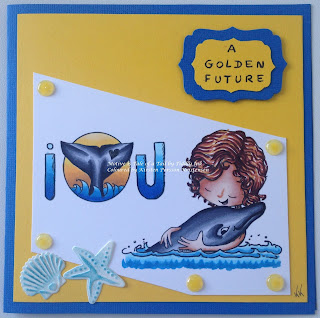 I added some yellow, melted Hama Pearls as embellishment and also a couple of die cut sea figures  which I distressed with blue.

I loved putting this card together as the shape of the coloured part is way out of my comfort zone, but I wanted to do something a bit different here. I hope you like it.

Be happy crafting!
Posted by kipekr at 12:03