Once a week I receive a newsletter with access to no less than 5 free digital images from http://opalmanor.com/. I have come to love these images, because I can merge them with other designer images and make the most wonderful (at least to me) images as my imagination unfolds itself.

Let me use this opportunity to say a big "Thank You" to Opal Manor for making these images available.

Last weekend I received another newsletter and in it was a Halloween challenge. Only black and greys colours allowed and at least one of Opal Manors images should be used.

How lucky was I? Two days before that, I'd been playing around with their images and come up with this design using not only one but three (3) of their images: A ghost, a tree and the easterwitch, which on this occasion became a Halloween witch. The moon I made in Word.

I've distressed the image very lightly with my black distress pad, giving the impression that's it's early night or a bit foggy. I'll leave that to your imagination. 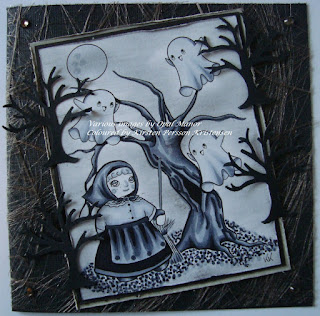 I had so much fun colouring this project and putting it together.

I shredded the edge of the image (not quite sure that's the correct word for it, but I don't know any other), I put it first on black then on grey cardboard, which I also shredded.

I added some cut out trees in black and dark grey gems in the corners. I don't know either, what the dark grey lace in the background is called, but it looks very nice with the project, a bit like a cob web.

I hope you all like my project. I'm definitely going to merge more of these images in the future, when I need something special.