Birthday card for a brother-in-law

Today I'm going to show you the birthday card I made for my big sisters husband, whose birthday was last week.

I was given the image by the wonderful Sarah Burr, who is a fellow Clowdie of mine. She draw some awesome digis and made this image available for those of use, who wanted it. 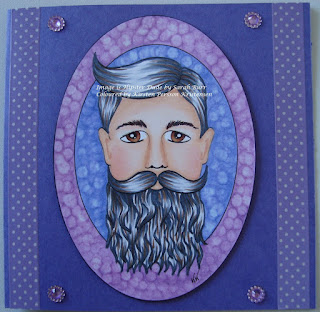 The image actually looks a bit like my brother-in-law and when colouring it in black/gray/white and with brown eyes it really looks like him - at least to me it does.

I've chosen a background, I've learned in a background class in Kit and Clowder, using alcohol to make the "bubbles" in the colouring.

I made it a cas card adding only a few gems at the corners. I don't think guys like too much embellishment on their cards, so I kept it simple.

Sarah Burr has already seen the finished project, but I didn't want to publish it until my Brother-in-Law had received the card.

Feel free to leave a message to let me know, if you like my card.

Please join my blog, if you would like to see my project on a regular basis.

Be happy crafting!
Posted by kipekr at 22:04