It's been a week since I've put something up here, but since this project was a birthday gift to one of my best friends, and she opened it (a bit early LOL) on Wednesday, I feel it's time to show it to you.

I took a deep breath before I started on it, determined to do as good as I could with my Faber Castell polychromos, and I think it fell out very nice. It's only my third FC project.

The project in question is of course the Create and Learn November Pencil class at Kit and Clowder. I'm so hooked on these classes, and they keep getting better and better.

I've had some problems with finding the right paper for the polychomos pencils, but this time I think I got it right - only problem is now, what to do, when I run out of it. I bought it in Germany in 2012 and it doesn't have a name. I only know it's 200g aquarelle paper and that it has a little tooth. Well, I know it'll be a while though before I run out of it, because I can get two images out of one sheet and I have just about 23 sheets. So, it's reserved for these classes only :-). 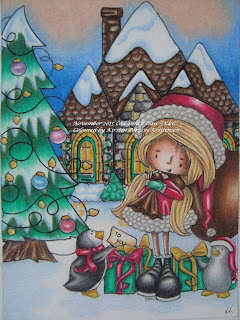 The image is called "A very snowy Christmas" hence the title on my post, featuring Wryn from Tiddly Inks, whom I love to colour, so it couldn't be better.

I do know that I forgot to colour in the snow, but that has been done later - and before my friend received it - and I do have a photo of it, but that's still in my camera.

It was really fun making this Christmas scene. It was a bit hard on my hands putting on the second layer, but a good massage of them afterwards helped.

It was also a bit of an eye opener, I've coloured with pencils since I was a little girl, and never had I thought to use them this way. What is really amazing to me is - among other things - that you can actually make pencil colourings like this look very much like it has been done with markers.

My colouring adventure is expanding all the time and I sooo love it.