On Sunday May 31st the youngest member of my Family (my nephews youngest daughter) was Christened, Luna. A wonderful name for a wonderful baby :-).

For this occassion I made a couple of Projects.

The first project I'll show you is the Card I first made for the Christening. The image I've used here is a Bestie from Sherry-Ann Baldy of a baby girl sitting on a moon. I thought this was very appropriate, since the name, Luna, means moon. 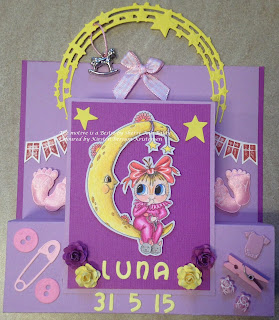 I coloured the image with my Caran D'ache pencils (dry technique) and tried to apply what I've learned during my Clothes Class at Kit an Clowder regarding cast shadows.
I added a few homemade roses in the colours used, and some stars (moon and stars belong together in my eyes) and some baby embellishments as well of which some were die cuts and others were brads, and to finish the project I added a charm of a rocking horse and hanged it from the stars. My message to Luna was written on the back of the project and here I added another cute Little image from Opal Manor of a sleeping baby girl. And of course I forgot to take a Photo of that one (mistake no. 1).
I made the envelope myself and also added a cute image here from Scrappers Delights (Fruity Babies Peaches) and also forgot to take a Photo of this one (mistake no. 2).
When my nephews eldest daughter was born almost 3½ years ago, I made a star book for her with some baby Photos of her, and I kind of thought that Luna's Card didn't match what I made for her big sister, so I decided to make one more project for her.
As a base for this project I used the baby onsie pattern in a recent Parchment Craft Magazine which was designed by Mary Kerr. And for this I used Photos of Luna, that her parents had shown on Facebook.  I added some lace borders around arms and legs. I had problems making it in parchment, so decided to go for Card board instead. That turned out very nice, but guess what!! I forgot to take a Photo of it (mistake no. 3).﻿

The second project I'll show you today is a card I made for my niece (the Godmother of the girl) to give on this special day. This is an image from Precious Moments of a baby laying on a blanket 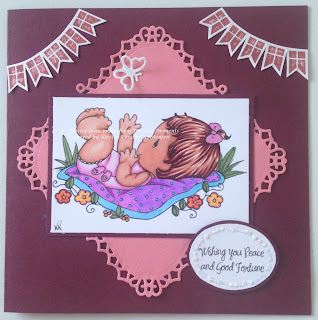 reaching out for a die cut butterfly I added. I also added the flags to celebrate the day and a sentiment from SimplyBStamps, on which I put some glitter (very popular with Luna's big sister). The sentiment is very suitable for a Godmother too, as it says "Wishing you Peace and Good Fortune", and who doesn't want that for a baby.

Be happy crafting!
Posted by kipekr at 13:53