Last weekend was a very busy colouring weekend for me. I did the 2 images I showed you in my last post and then 3 more, which I'll show you here.

I also did this image from Scrappers Delights I'm showing you below. I've had her for about half a year and had promised Janice Cullen Collier to colour her, as soon as I got more time on my hands. I felt I couldn't postpone this any longer since I'm on holiday, so I threw myself into a colouring weekend. 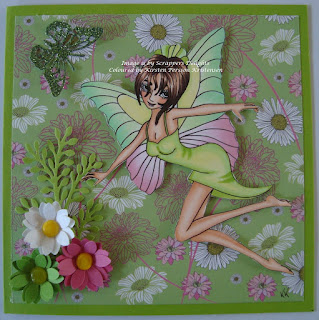 I had this gorgeous backing paper, which I thought was really suitable for the "Spread your wings Fairy". I added some extra flowers in the colours of the backing paper and a butterfly die cut from
green glitter paper.

I LOVE Yampuffs images, they are such great practice of particularly hair, skin and pleats. I noticed that Yampuff had put up a new image, which was intended for a summer competition and since I've done a Create & Learn class with an underwater scene, I was not afraid to enter the competition. Last year I entered Yampuffs Spring competition but alas I didn't win, but the exitement of participating is also much fun. This time I only submitted a colouring, but she'll be put on a card later or maybe in a frame. 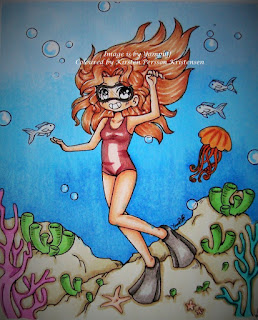 As if the Kit and Clowder celebration wasn't enough, Aurora Wings celebrated reaching 1.000 members last weekend too, with lots of games, and had a release of some super images and offered this cutie "Acorn Sprite" for free at the end of the party, and to join it in a colouring competition, if you wanted. He's also a colouring, but will be put on a card later.

I've kept him in rather dark autumn colours since that's the time of year you find acorns in nature. 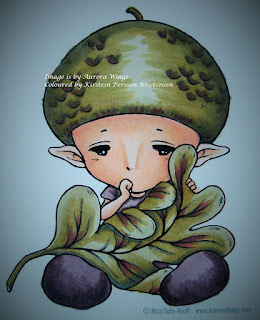 I hope you like the projects I made, feel free to leave me a message below, if you do.

NEWS - NEWS - NEWS!
I'll be adding one more page to this blog with my Art Abandonment projects. Much more about that later.

Please join my blog, if you would like to see my cards on a regular basis.